Chefs Christopher and Jordan vs. Chefs Matt and Lise

The Secret Ingredients chosen were: Appy – Goat Cheese Entrée – Pork Dessert – Chocolate. 21 Guests Attended – Members of the Cowichan Dragon Divas and their dates. This was a big, noisy group and we had a special Commentator – Bruce.

The Best Copper Chef so far!

Entrée:  Cinnamon coated pork tenderloin with coffee and cinnamon and nutmeg rub with roasted maple and spiced butter; yams with asparagus with ginger and shallots with oyster mushroom demiglace.

It’s 4 pm at Shawnigan Shores B&B Retreat and the Copper Chef Charity Cook-Off guests begin to arrive. Elly explains that she’s meeting our Chefs at Thrifty’s in Mill Bay. Our duty now is to vote on the key ingredients.

We chose – Lemon for the Appetizer, Beef for the Entrée and Raspberries for Dessert.

Elly explained the rules, costs and invited anyone that wanted to watch the “shop” to go with her to the grocery store. About half the troop went there – while the others enjoyed the view and chatting with the other judges.

About an hour later, a noisy crew arrived back from the store and the cooking began!!

Chef Christopher and Chef Matt both wowed their audience with beautiful and original – appetizers, entrées and desserts. The competition had been fierce and had gone a little longer than normal. (We agree this was due to the absence our strict timekeeper – Elizabeth- she was truly missed.)

Elly took a long time to tally the scores, she had to triple check the numbers. For the first time in Copper Chef history – there was a tie! 869 points for each Chef. It is really unusual, especially considering that were a lot of judges. 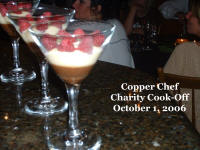 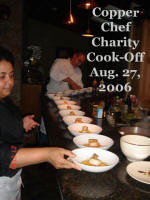 The Copper Chef event opened with a tour of the facilities on the grounds of Shawnigan Shores. The day was perfect with the sun shining down on all of us.

First job: Pick the ingredients. Elly read from her list and items were voted on. The food items with the most votes won!

Now for the chefs to create delicious order out of chaos.

To kick things off, the chefs and their assistants and a few onlookers piled into their vehicles and made their way down to Thrifty’s.

The starting gun went off (chef’s given a 20 minute time limit) – and it was off to the races.

Both chefs hurriedly made their way down the aisles of the store hastily grabbing this and searching for that. At the five minute mark Elly’s voice could be heard through the loudspeaker: “Chefs! Your time is almost up, FIVE MORE MINUTES”.

They made it and off we set for Shawnigan Shores.

The Chefs were introduced as Brad and Fatima and the cooking began immediately.

First was an absolutely gorgeous appetizer – an “extra” – which the guests consumed with looks on their faces that are rarely seen outside of bedrooms.

The appetizers – one from each chef were then presented.

At this time a few of the ladies present worried that they might have difficulty finishing everything. Our gentlemanly guest, Shane, offered to be our own personal bottomless pit. We availed himself but somehow, most of us managed to make it to the end.

Two portions of three courses later, we were all stuffed with food, glowing with wine and absolutely overwhelmed by the quality of the food and the company we had just experienced at this wonderful Copper Chef extravaganza.

Votes were counted and the lovely and talented Fatima took home the coveted win as her nemesis Brad congratulated her enthusiastically.

In reality everyone won after an evening spent surrounded by fabulous food, fascinating people and a perfect environment. All proceeds from this event were sent to charities chosen by the chefs involved.  Thank you everyone for such a wonderful evening.